After enduring years of suppression, Christianity in China has experienced steady growth for more than three decades; recent estimates suggest that about 100 million Christians live in China.

Yet this expanding and relatively young church has many needs: a large number of believers live in rural China, where Bibles are scarce. Trained Christian pastors are stretched thin, and often pastor multiple congregations to help meet the overwhelming need for spiritual leadership in China’s booming church. And in a country of 1.3 billion people, the work of sharing the good news of God’s Word is vital.

Bible Distribution: As the Chinese church has grown, the need for Bibles has skyrocketed. Many Chinese Christians are still waiting for God’s Word due to the overwhelming demand for Bibles across the country, the meager incomes of many rural Christians and a limited number of translations in minority languages. Each of these situations presents a unique opportunity to share God’s Word with those who are eagerly waiting.

Bible Translation: Christianity has found strong footing in the fields and mountains of rural China. But many people groups living in these rural regions do not speak Mandarin as their first language. These Christians long to hear God’s Word in the languages that they use to speak and sing with their families. Once Scripture is translated into local languages, many Christians will need help learning to read and write in their mother tongues so that they can fully engage with Scripture.

Christian Pastors: China needs well-trained pastors to shepherd the country’s growing Christian flock. Now, pastors walk many miles between rural congregations on Sunday mornings, doing their best to reach as many people as they can with the message of the Bible. And once they arrive at a particular church, they often preach the same sermon multiple times—each time in a different language for the diverse dialects represented in rural congregations. Increasing the number of pastors who are trained in sound biblical teaching and equipped with relevant, modern Scripture resources, would undergird the church with the leadership it needs to continue to sustain massive growth. 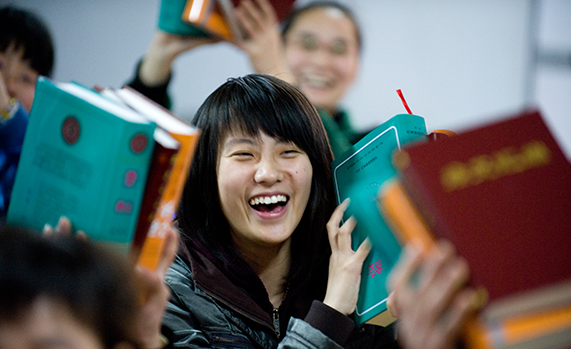 Bible Distribution: For years, American Bible Society’s financial partners have helped provide God’s Word to Chinese Christians who were waiting for their first Bible. Many of these Bibles were printed at Amity Printing Company, which was established by United Bible Societies and Amity Foundation in 1985. Amity Printing Company, the only authorized printer of Bibles for China, has since produced 140 million Bibles—87 million for Mainland China and the rest for people around the world.

American Bible Society’s financial partners have also made it possible for UBS China Partnership, an outreach of United Bible Societies that supports the church in China, to produce relevant Scripture Portions that often feature the testimonies of Chinese Christian celebrities. Believers in China have used these Scripture Portions throughout the country to minister in the midst of millions who do not know Christ.

Bible Translation: In China’s rural provinces, UBS China Partnership is translating the Bible into minority languages that have no access to Scripture. With support from American Bible Society’s financial partners, UBS China Partnership helps provide the technology and training for Bible translation work, which poor subsistence farmers would not otherwise be able to afford. Our partners also sponsor Scripture-based literacy classes, so that minority people groups can learn to read the Bible with relative ease. Through these efforts, God’s Word continues to increase and multiply throughout China’s rural church.

Christian Pastors: Roughly 1,200 students will graduate from one of China’s 22 seminaries and Bible schools every year. Through UBS China Partnership, American Bible Society’s financial partners equip 10 of these schools with Bibles, commentaries, computers and Bible study software for students to deepen their knowledge of God’s Word. Graduates who minister to rural congregations receive financial support to supplement any income they make by farming. As a result, Chinese Christians benefit from biblically-based teaching and leadership.

Bibles for China printed since the Amity Printing Company formation in 1987.

of China’s total population lives in a non-urban region