As the world’s second most-populous country, India is one of the largest mission fields in the world. A land of 1.2 billion people, India faces great spiritual and physical needs. A mere 2.3 percent of the population is Christian while 93 percent is either Hindu or Muslim. And with 348 million people living in poverty, India is home to men, women and children searching for hope and meaning in life. In the midst of this great need, American Bible Society’s financial partners are making it possible for the Bible Society of India to bring the hope of God’s Word to one of the largest and most diverse people groups on earth.

Bible Translation: In India, the Bible is simply not readily available in everyone’s heart language. Of the country’s 3,000+ languages, a mere 216 are spoken by 10,000 people or more. So far the Bible Society of India has provided complete Bibles in 65 languages and New Testaments in 75 languages, but the need for more Bible translations is still great.

Bible Engagement: Even as the Bible becomes more readily available, many people in India are simply unable to read it; 28 percent of the population is illiterate. With so many people unable to read paper Bibles, the Bible Society of India needs to employ non-traditional ministry initiatives to reach people with God’s Word.

Interfaith Outreach: There are more than 28 million Christians living in India today--a mere drop in the bucket when compared with India’s massive population of 1.2 billion. The vast majority of Indians are either Hindu (79 percent) or Muslim (14 percent). In fact, as a country, India contains the second most Muslims in the world. Sharing the good news of God’s Word in this religious context is not easy, especially since several Indian states recently passed anti-proselytization laws.

Orphans and Widows: India’s religious and socio-economic environment has left many women and children in need of spiritual support. The dominant Hindu culture is patriarchal, and many Indian women face discrimination, domestic violence and abandonment by their families. India is also a very poor nation; nearly 30 percent of the population lives in poverty. There are nearly 8 million homeless children in India living without the stability of a family. Suffering women and children are looking for hope and life’s meaning in the midst of these difficult circumstances. 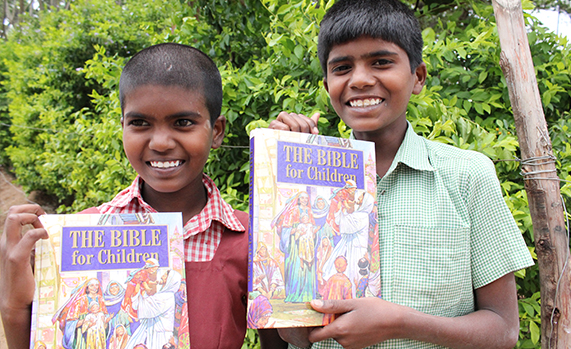 Bible Translation: To reach those still waiting for God’s Word in their heart language, Bible Society of India is currently running many Bible translation projects in India. The growth of Christianity among these language groups has been phenomenal. They have begun to reject a history of animist beliefs in favor of the Christian religion. The 25 translation projects sponsored by American Bible Society’s financial partners are all continuations of already-completed New Testament projects; translations of the Old Testament are underway so that these people can access the entire message of the Bible in a language they understand. Altogether, these projects will open up the Old Testament for about 750,000 native speakers.

Bible Engagement: Bible Society of India runs several innovative ministries that bring the Bible to life beyond the written page. A project called “Bible Voice” distributes thousands of audio Bibles in formats such as DVD’s, Micro SD Cards, MP3 Players and Compact Solar Devices. Through the End-to-End, a program that introduces people to Christianity and regular Bible engagement through screenings of the Jesus Film, participants receive Gospel Portions in local languages. These initiatives help non-literate residents in India easily engage with the life-changing message of God’s Word.

Interfaith Outreach: Bible Society of India, with support from American Bible Society’s financial partners, has found several creative ways to make the Bible available to people of other faiths who want to learn more about Christianity. A robust medical ministry makes custom Scripture resources available to India’s hospital patients. Scripture Portions organized around topics about sickness and suffering have been well received by hospital patients of various faith backgrounds. And since 1952, Vacation Bible Schools have attracted children from various faith backgrounds to learn about the God of the Bible.

Orphans and Widows: To support needy women in India, American Bible Society’s financial partners support Bible Society of India’s Bible-based workshops for women seeking hope and meaning in life. Through fellowship and Bible study, women seek healing from abuse and learn valuable life skills. We also help distribute easy-to-read Bibles to tens of thousands of orphans in India by partnering with local orphanages. Through these initiatives, women and children in desperate need of God’s hope are encountering the love of Christ in the pages of Scripture.

of the Indian population lives in poverty

different languages are spoken in India

of India’s population is Hindu

of India’s population is Muslim

of India’s population is Christian