Roman Catholics in the U.S.

With more than 1.2 billion adherents around the globe, The Roman Catholic Church is

one of the world’s largest religious groups

And 76 million of those Catholic believers reside in the United States, making up 23 percent of the American population.

Although the Catholic Church is built on centuries of rich theological and liturgical traditions, Catholic leaders continue to rely on Scripture as they fuel the Church’s mission in modern society. And as Pope Francis puts it, “The life and mission of the Church are founded on the Word of God, which is the soul of theology and, at the same time, the inspiration of all Christian existence.”

In the United States, Bible ownership is common among practicing Catholics; 96 percent say they own a Bible. But Bible engagement is not as prevalent. Although 66 percent of practicing Catholics say they read the Bible at least three to four times a year, that number drops to 40 percent when including nominal Catholics.

Yet 77 percent of practicing Catholics say they want to read the Bible more, which provides a unique opportunity to equip Catholics to engage with the life-changing message of God’s Word, while simultaneously honoring the longstanding traditions of the Catholic Church. 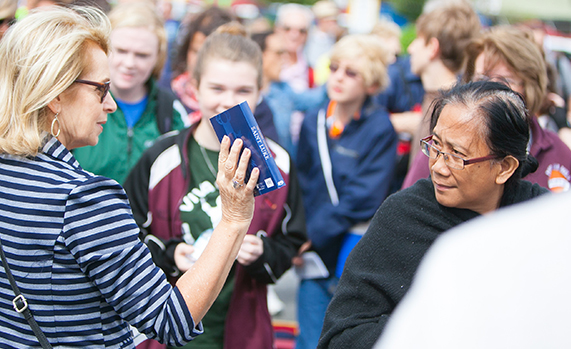 Scripture resources created in collaboration with the Catholic Church are key to increasing Bible engagement within the Catholic community. One flagship resources for Catholics is “Lectio Divina,” an ancient exercise of Bible reading, meditation and prayer. This resource, which is made possible thanks to American Bible Society’s financial partners, helps Catholics engage with Scripture through “Lectio Divina” training sessions, printed guides and digital Scripture journeys.

And through partnership with the Catholic Church during large Catholic events, such as World Youth Day and the World Meeting of Families, Catholics of all ages, and from every corner of the globe, have access to easy-to-use resources for Scripture engagement.

billion Catholics in the world

practicing American Catholics own a Bible